Yes, you read that right.

Gerald Hodges and NaVorro Bowman have been using their downtime this offseason to watch movies and strengthen their bond when they're not taking part in Chip Kelly's first practices as 49ers head coach.

Beyond the engaging visuals and never-say-die lessons of the Leonardo DiCaprio movie, Hodges explained that movie sessions involve a strict selection process.

"They have to be good movies," he said. "They can't be any movies. They have to make us think."

Such is the life for two NFL linebackers who find ways to improve even when they're not wrapping their minds around Jim O'Neil's defensive playbook.

"It's football season," Hodges said. "So when we leave here, (it's time to) relax, beat the playbook up and enjoy ourselves."

Hodges, whom the 49ers acquired in a trade with the Minnesota Vikings last October, has made a concerted effort to revamp his offseason preparation work. Hodges has latched on to his Penn State role model. From hot yoga training sessions to attending the Nittany Lions spring game together, Hodges said Bowman's been willing to help at every turn.

"It's been amazing to have a chance to be around him and see how he works … see how he became great," said Hodges, who recorded 39 tackles in the final four weeks of the 2015 regular season for the 49ers.

Hodges went on to reflect on his first encounters with Bowman in 2009 back in State College, Penn. Hodges saw action as a true freshman at PSU. Meanwhile, Bowman recorded 93 tackles and went on to be a third-round selection by San Francisco.

When asked about his earliest memories of playing with the 49ers All-Pro, Pro Bowl linebacker, Hodges took a moment to ponder his answer.

"I really don't know what a young NaVorro is like, because he's always been NaVorro," Hodges said. "Even when I got there, he was always mature.

"Any time him and Patrick (Willis) had a chance to play, I was right there watching," Hodges said. "That's what I wanted to do. I wanted to create my game around their game and take my game to the next level."

As teammates on the 49ers, Hodges makes sure to pay close attention to the qualities that have enabled Bowman to be a three-time Pro Bowl selection and four-time All-Pro player.

"I see the way he walks, the way he talks, the way he commands the defense," Hodges explained. "He has the stature that, 'I'm the captain of this defense and this is how it's going to be.' That's what I study the most."

The San Francisco 49ers held a voluntary minicamp prior to the 2016 NFL Draft.

Hodges has an opportunity to compete for a starting 'backer position next to Bowman in San Francisco's 3-4 defensive scheme. The 49ers also have linebackers Michael Wilhoite, Ray-Ray Armstrong, Shayne Skov and Nick Bellore as veteran options in the mix for playing time.

For Hodges, the camaraderie amongst the players in the linebacker room is as enjoyable as movie nights.

"That's another level of fun right there," the fifth-year pro said. "If you're a guy who loves to compete, then you're having a blast the entire time. There's nothing like it."

Last week on "49ers Live," Bowman referred to Hodges as the funniest player on the roster. In response, Hodges said he enjoys being someone to lighten the mood in the locker room.

"I try to keep my jokes to a minimum to just in the locker room with the guys, because when I get on the field, my teammates and coaches know I'm all business," Hodges shared.

But that doesn't mean the practice sessions haven't been upbeat in nature.

Sounds like the perfect script for a movie night.

Bowman credited Hodges as being the funniest players on the roster. Hodges, in defense, said he enjoys being someone to lighten the mood in the locker room.

For one, I'm around him almost 24/7. Outside of the facility and inside, we hang out almost every day. I keep him laughing. I'm a jokester. I try to keep my jokes to a minimum to just in the locker room with the guys, because when I get on the field, my teammates and coaches know I'm all business. 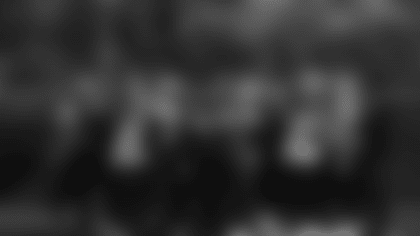 For the third-consecutive year, San Francisco 49ers fullback Kyle Juszczyk has been selected as a finalist for the 2022 NFL Sportsmanship Award.

Catch up on the latest San Francisco 49ers headlines.

49 Hours: Next Man Up Against the Dolphins

Mic'd Up: Dre Greenlaw Scoops and Scores Against Dolphins

CityTeam Joins 49ers Alumni for an Afternoon of Video Games

Kyle Shanahan: 'We Have a Resilient Group'

Fred Warner Seals the 49ers Week 13 Win with a Interception

Transplant Recipient Meets His Donor, a 49ers Coach, for the First Time