The San Francisco 49ers are set for training camp to begin at the end of the month. But before the team can defend its NFC West division crown this upcoming season, let's take a look at the depth of each position group on the roster as they prepare for camp. Offensive linemen are up next. OVERVIEW

It took a few weeks for the 49ers offensive line to hit its stride in 2011. Vocal left tackle Joe Staley insisted the offensive line was not as bad as critics suggested. He was right. Following Staley's statement, the 49ers offensive line paved the way for Frank Gore's franchise-record five consecutive 100-yard rushing performances. The 49ers finished 2011 as the league's eighth-best rushing attack, averaging 127.8 yards per contest. Staley went on to earn his first ever Pro Bowl selection as the NFC's starting left tackle. Months later, Staley's peers voted him as the league's No. 67 overall player. But it wasn't just the left tackle enjoying success, the entire offensive line made strides. Second-year linemen Anthony Davis and Mike Iupati started all 16 games for a second consecutive season. Center Jonathan Goodwin solidified the interior of the line, won the team's Bobb McKittrick Award given to the top lineman, and continued to strengthen bonds with his new teammates into the offseason. San Francisco also added two offensive linemen in the draft, just as they did in 2011 with the selections of Daniel Kilgore and Mike Person. This time around, the 49ers traded back to acquire Wake Forest guard Joe Looney in the fourth round and later selected Western Oregon offensive lineman Jason Slowey in the sixth round. Looney has not fully participated in practice with the 49ers due to a foot injury suffered at the 2012 Senior Bowl. Looney and the coaching staff remain optimistic about his chances of returning in time for camp. Meanwhile, 6-foot-8, 300-pound lineman Alex Boone has been given the first opportunity to claim the team's vacant spot at right guard. Coaches have applauded Boone's transition thus far, and also praised the efforts Davis has made with his footwork.

With Goodwin opting to train close to home at the start of the offseason program, Kilgore was inserted into the starting lineup at center. Kilgore enjoyed the experience, but made sure to credit Goodwin for being such a big help during his rookie season. Another young lineman, Slowey, took a lot of snaps this offseason as a backup center. The other 49ers rookie draft pick, Looney, will continue to update his fans this season as he was chosen to be 49ers.com's rookie blogger. With four draft picks used on offensive linemen over the past two seasons, it's important to not overlook Stanford products Derek Hall and Chase Beeler. Both spent 2011 on the practice squad where they traveled with the team and continued to strengthen their bodies to make an impact this coming season. 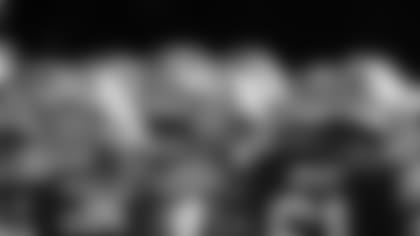 The San Francisco 49ers inched closer to their 53-man roster on Tuesday.

Could Trent Williams Crack the Top 10 of the NFL's Top 100 List?

DeMeco Ryans on What it Means to Play '49ers Defense'

49ers Top Plays from their Divisional Round Win Over the Packers

Best Plays from the 49ers Defense and Special Teams vs. the Packers

Training Camp Rewind: Breaking Down the Top Storylines from #49ersCamp

Brick by Brick: Whatever It Takes